By Karina Toledo | Agência FAPESP – A new antifungal compound has been discovered by Brazilian and North American researchers in bacteria that inhabit the nests of ants of the Attini tribe (subtribe Attina), to which belong the saúva and other species known as “cutters”. In tests with mice, the substance – named attinimycin – was shown to be able to fight a disease-causing microorganism in humans.

The results of the research, carried out with support from FAPESP, were published in the journal ACS Central Science, of the American Chemical Society.

“We had the opportunity to sample anthills in several Brazilian regions, including the Amazon, the Atlantic Forest and the transition section from this one to the Cerrado. What caught our attention the most was the wide geographic distribution of attinimycin, present in 73% of the bacteria associated with leaf-cutting ants collected in Brazil. This fact suggests that the substance has a relevant ecological role ”, says Monica Tallarico Pupo, professor at the Faculty of Pharmaceutical Sciences of Ribeirão Preto at the University of São Paulo (FCFRP-USP) and coordinator of the research alongside Jon Clardy, from Harvard University (U.S).

As Pupo explains, leaf-cutting ants maintain multilateral symbiotic relationships with various microorganisms that inhabit the anthill and this guarantees them food and protection. The leaves that the insects carry into the nest serve as a substrate for cultivating fungi of the species Leucoagaricus gongylophorus, which they use to eat. And farm ants also feed bacteria of the genera Pseudonocardia and Streptomyces, which in turn produce compounds that act as “agricultural pesticides”, keeping the fungus garden free of pathogenic species.

“Symbiotic bacteria produce compounds capable of killing the parasitic fungus without harming the food source. Our goal was to find out what these compounds are and whether they had the potential to treat diseases that affect humans, ”says Pupo.

The project was conducted between 2014 and 2020, under the BIOTA-FAPESP Program and under an agreement signed with the National Institutes of Health (NIH) in the United States. During this period, in addition to attinimycin, the group identified an antifungal molecule named kyphomycin and substances belonging to the pyrazines class – also produced by symbiotic bacteria -, which help leaf-cutting ants to locate themselves when they leave the nest in search of leaves (read more at agencia.fapesp.br/29958/ and agencia.fapesp.br/27328/).

The first stage of the recently published work involved analysis of metabolomics. Using techniques such as chromatography and mass spectrometry, scientists identified the entire set of metabolites produced by isolated bacteria in anthills of different Brazilian biomes.

“We noticed that the same compound – hitherto unknown – was present in almost all samples, something rare and unexpected. We then decided to investigate this molecule further. Attinimycin has a structure similar to that of already known compounds, but the amino acid sequence that forms this compound has never been described before ”, says Pupo.

The next step was to characterize, in the genome of the bacterium Pseudonocardia spp., The group of genes responsible for the synthesis of attinimycin. Based on the results, the researchers designed primers (small fragments of DNA complementary to the genetic material to be studied) that allowed to evaluate whether this same group of genes was present in symbiotic bacteria from other species of leaf-cutting ants.

A large collection was evaluated, which included samples collected by employees in Panama. However, the attinimycin genes were only found in the symbionts of the Brazilian lineages. “This finding raised the hypothesis that during the evolutionary process of these insects there was a differentiation, since this ability to produce attinimycin is related to the evolution of the Brazilian symbiotic strains”, says Pupo.

After characterizing the molecule in the laboratory, the group coordinated by Pupo returned to one of the places where the initial samples had been collected: Itatiaia National Park (RJ), in Serra da Mantiqueira. The objective was to find out if attinimycin was actually being produced in the natural context in which ants and their symbionts live. In the previous experiment, the bacteria had been grown in the laboratory, and the metabolites were extracted from that culture in vitro.

“This second time, we did the extraction of the metabolites at the collection site, to then analyze by mass spectrometry and see the chemical substances there. We detected attinimycin in about 40% of the samples. This shows that the compound must have an important role in this symbiotic system ”, says the researcher.

In the laboratory, says Pupo, attinimycin inhibited the growth of the Escovopsis fungus, a pathogen of leaf-cutting ants, which suggests its protective role in the natural environment. 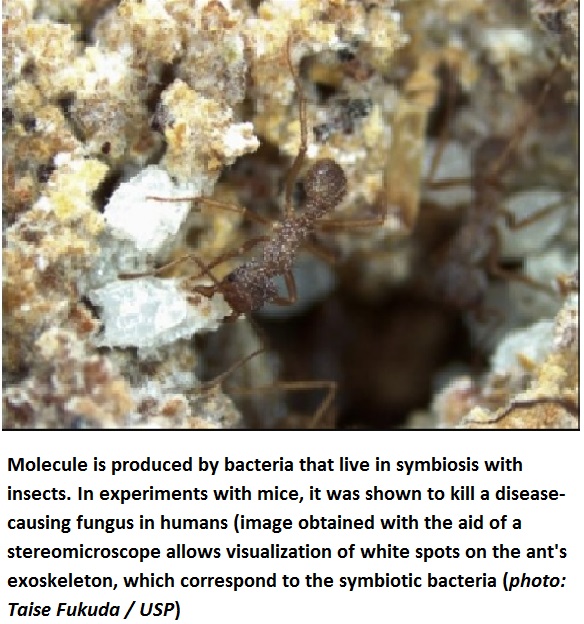 The antifungal action of attinimycin was tested by North American collaborators in mice infected with Candida albicans, which in humans can cause damage to several tissues, mainly in the oral and vaginal mucosa, urinary and gastrointestinal tract. The treatment effect was compared to that of antifungal drugs already used in the clinic (azole class), among them fluconazole. According to the researchers, the activity of attiminicina was equivalent to that of the drugs already available. The advantage is that, because it is a new molecule, microorganisms have not yet developed resistance mechanisms.

“Attinimycin has significant antifungal activity, but it still lacks an adequate chemical structure to become a drug. The idea is that it serves as a model for the design of new drug candidates and for us to better understand the mechanism of action of these drugs ”, explains Pupo.

The article Specialized Metabolites Reveal Evolutionary History and Geographic Dispersion of a Multilateral Symbiosis can be read at https://pubs.acs.org/doi/abs/10.1021/acscentsci.0c00978?source=cen%20no